Christ the King was instituted by Pope Pius XI in 1925 as a reminder to the faithful that despite the political upheavals present in that time:

In the first Encyclical Letter which We addressed at the beginning of Our Pontificate to the Bishops of the universal Church, We referred to the chief causes of the difficulties under which mankind was laboring. And We remember saying that these manifold evils in the world were due to the fact that the majority of men had thrust Jesus Christ and his holy law out of their lives; that these had no place either in private affairs or in politics: and we said further, that as long as individuals and states refused to submit to the rule of our Savior, there would be no really hopeful prospect of a lasting peace among nations. Men must look for the peace of Christ in the Kingdom of Christ; and that We promised to do as far as lay in Our power. In the Kingdom of Christ, that is, it seemed to Us that peace could not be more effectually restored nor fixed upon a firmer basis than through the restoration of the Empire of Our Lord.

from Quas Primas, encyclical of Pope Pius XI on the Feast of Christ the King

A suggestion for music to accompany the Feast of Christ the King: Christus Vincit, Christus Regnat (may be used during the Entrance procession). 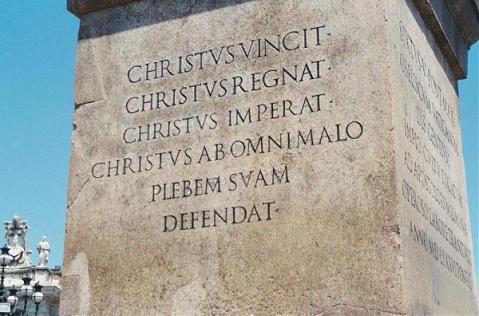 Pope Sixtus V had these words engraved into the obelisk which stands at Vatican City, Rome. The chant is sung in the Catholic Church in solemn events, often at Pontifical High Mass. Christus Vincit has its origins as far back as ancient Rome. When Roman leaders including general, emperors or consuls entered the City after triumph in a great battle they were meet by the chants of the people. Charlemagne, himself adopted Roman traditions for his own use when he was crowned as Emperor of the Romans in 800A.D., he adopted Christus vincit, Christus regnat, Christus imperat, also called the Laudes Imperiale. Those words formed a chant which was used in the coronations of the Holy Roman Emperors for centuries.

Here is an example of the Gregorian Chant version found in the Parish Book of Chant (Christus vincit – music):

And here is an example of a popular adaptation of the Christus Vincit with Psalm 116:

Here’s the Latin-English translations adapted for use in the Singapore diocese: 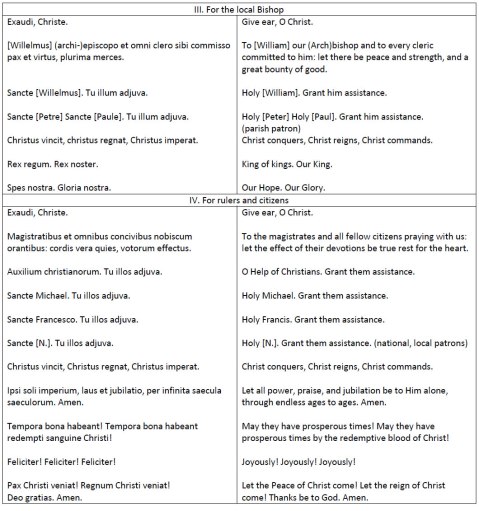 If you found this article helpful, feel free to share :)

SPP Choir sings at the Saturday 5:30pm Mass at the Church of Sts. Peter & Paul, Singapore. We aim to rediscover and restore the traditions of our Catholic Mass for the Ordinary Form.
View all posts by sppchoir »
« Previous post
Next post »

The views and opinions expressed on this site are those of the authors and do not necessarily reflect the official policy or position of any organization within the parish church of Sts. Peter & Paul Singapore, or of the Singapore Catholic Archdiocese.